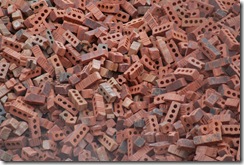 Are there any unfinished projects lying around your house? Or what about unachieved dreams stashed away in the recesses of your heart? If you’re anything like me, you’ve at least once started a project with great zeal and enthusiasm only to have the incomplete pieces stashed away in a closet.

Well you and I are not the only ones, who have ever done such. In, Ezra 4:25-6:22, we find the Temple of God in Jerusalem still incomplete and all work has ceased on this ordained and worthy project. The rebuilding had been ordained by God and commissioned by King Cyrus but it encountered some interference and opposition that halted all progress.

24 That put a stop to the work on The Temple of God in Jerusalem. Nothing more was done until the second year of the reign of Darius king of Persia.

1-2Meanwhile the prophets Haggai and Zechariah son of Iddo were preaching to the Jews in Judah and Jerusalem in the authority of the God of Israel who ruled them. And so Zerubbabel son of Shealtiel and Jeshua son of Jozadak started again, rebuilding The Temple of God in Jerusalem. The prophets of God were right there helping them.  Ezra 4:24-5:2

After hearing the prophets Haggai and Zechariah prophesy, Zerrubbabel and Jeshua were moved to action and they started again to rebuild the Temple of God. Nope, this wasn’t the first time they had made the decision to obey the voice of God. They did it before and failed but something about what the prophets said (the Bible doesn’t even go into the specifics of what the prophets said) stirred up their faith enough to begin the work again. When faced with starting something again,the fear of failing again tends to immobilize me. But these men were moved from their inactive state to one of purposeful activity. All by hearing two men speak. Which leads me to believe that at times God uses people to spur us back into action. You might not be prophesying but something you shared in a blog post or conversation shared among associates can be a word spoken in season for someone else that moves them from an inactive state.

Did they meet some opposition after deciding to begin again? YES. Will you or I meet some opposition/interference when we choose to begin again? YES, we will. Opposition or interference is often wrapped up in the subtle sayings of others questioning if this is something you really should be undertaking. At other times opposition is clothed in the soft whispers of our voice that speaks doubt. The good news is that neither has to stop us from finishing the project. Further reading in Ezra, shows that the exact people who were coming to bring distraction from the building were the same people who were commanded by King Darius to ensure that the people of Judah had everything they needed to complete the rebuilding.

Whether it’s been 2 days, 2 months or 2 years since you first started your quest to build your “temple” or dream, you can simply start again.