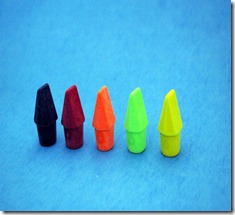 is even farther away. But I do recall how lining up and staying in the line was an important part of that world. You lined up to go the restroom, cafeteria, library, or any other destination. And for a girl whose last name is at the back of the alphabet chain, I often found myself near the caboose of such lines. Then there was those coloring pages that we were expected to stay within the lines.

Lines, lines, lines, and more lines. Lines create order. Lines create expectation. If I know my place in line relative to others, I can estimate when my turn is next. But what happens when someone breaks line? For most people, unless they are feeling extra nice that day, to be cut in front of is not a welcomed occurrence.

The account of Israel’s blessing of Ephraim and Manasseh found in Genesis 48 reminds me of how God often breaks our preconceived lines. According to their tradition, the oldest son was in line for the blessing. Joseph being the good little father that he was even attempted to help set things up so the blessing would come to the one at the head of the line.

13 Then Joseph took the two boys, Ephraim with his right hand setting him to Israel’s left, and Manasseh with his left hand setting him to Israel’s right, and stood them before him. 14 But Israel crossed his arms and put his right hand on the head of Ephraim who was the younger and his left hand on the head of Manasseh, the firstborn. 17 When Joseph saw that his father had placed his right hand on Ephraim’s head, he thought he had made a mistake, so he took hold of his father’s hand to move it from Ephraim’s head to Manasseh’s, 18 saying, "That’s the wrong head, Father; the other one is the firstborn; place your right hand on his head." 19 But his father wouldn’t do it. He said, "I know, my son; but I know what I’m doing. He also will develop into a people, and he also will be great. But his younger brother will be even greater and his descendants will enrich nations." Genesis 48:13-14, 17-19

However, Israel did a switcheroo. He skipped over the firstborn. Leading Joseph to assume he had made a mistake. I can’t tell you how may times I wrongly believed that God some how made a mistake. Didn’t he know I was next? And, there has even been those times, when he picked me but according to the natural order of things it was not yet my time. I’m so glad that God does not have to stay within the lines of our human thinking or our man-made traditions.