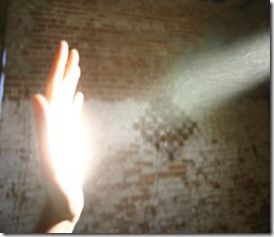 Earlier today I read a post by Beth over at I’m Headed Towards My Destiny and she certainly gave the post a fitting title-You Must Read This. She shares how during a recent casual visit with one of her cousins the Miracle Worker showed up! Reading it stirred my faith this morning. I have read about such miracles in days of old but haven’t laid my natural eyes on one of that type, yet. But I heard the news that He’s moving over in NC. Could Arkansas be next? Or maybe He’s already show up at your residence. If He hasn’t, keep looking! He promised in His Word He would show up when we call Him.

If you’re like me, you have called Him about some things but He’s yet to appear in that particular area. I know some times my courage and my faith wanes so much so that I don’t feel like praying about that again. But, like my pastor said during Sunday’s message, do IT again. PRAY again. BELIEVE again. HOPE again. TRUST again. DECLARE His Word again.

Again, I ask could Arkansas be next? Well I already know He’s moving here, too. Just last Saturday, my sister interrupted our phone conversation to answer a call from our cousin. After not hearing back from her for a while, I assumed she had gotten busy but eventually she did call back with wonderful news. She described how this male cousin of ours was expressing his experience with the spirit of the Lord and how much he hungered for more of God. During the course of their conversation, she said he just wept and shared how he longed for other members of our family to have this same experience.

While she shared this with me, I was in sheer amazement . Why? I mean I am a believer in Jesus Christ. But I still listened in shocked wonderment because I was hearing with my own ears the report of the miracle worker showing up on a side of my family that I least expected.  The two sides of my family are like vanilla and chocolate or oil and water. One has a long history of walking with God and the other an even longer history of walking in the ways of the world.  Don’t misunderstand me; both sides of the family have its share of rebels and redeemed ones but the concentration mix is different between the two.

After reading Beth’s post and reflecting on the conversation with my sister, I can’t help but give Him praise. Who else but God can bring healing? Who else but the Sovereign One can make Himself known to those we often consider as hard cases? Is there anything too hard for Him?

Don’t you know anything? Haven’t you been listening? God doesn’t come and go. God lasts. He’s Creator of all you can see or imagine. He doesn’t get tired out, doesn’t pause to catch his breath. And he knows everything, inside and out. Isaiah 40:28 (The Message)