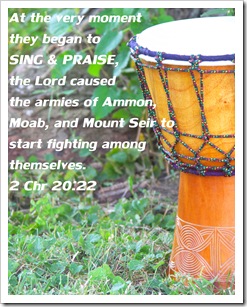 2 Chronicles 20:22 At the very moment they began to sing and give praise, the Lord caused the armies of Ammon, Moab, and Mount Seir to start fighting among themselves.

As I read through by daily Bible reading, this particular passage of scripture stood out to me. King Jehoshaphat and the people of Judah were facing war with a mighty enemy. The Word of the Lord to them was that they would not have to fight but take their positions; stand still and watch the Lord’s victory. Although fighting was not required of them, they did have to show up to the battle. I was impressed by the way they went out to the battle. Not with complaining or fear but with singing and praise. At the very moment they decided to sing and praise, the Lord moved.

Reading this made me begin to ponder about my own attitude when facing battle in my life. I don’t always have a prophet speaking words of victory to me like Judah did but I do have God’s Word that proclaims He gives me overwhelming victory. Yet even knowing and reading His Words, there are times I cringe, hide and complain rather than taking my position courageously with a song on my lips and praise in my heart. How many times have I limited his ability to move because I was in the wrong place and posture of heart?

Find others serving up the Word this Wednesday at the Internet Devotion Cafe.